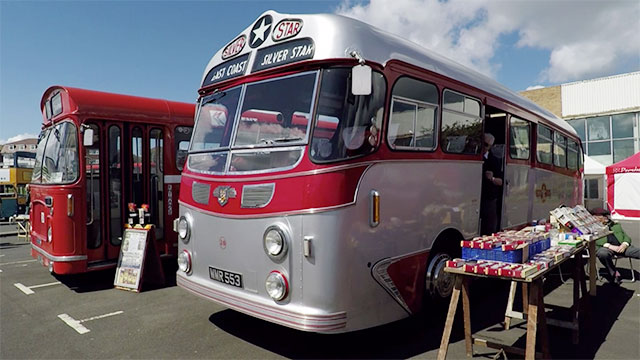 It’s hard to think of many things more ‘British’ than a day out at the seaside.  The reality of which often falls short of the idealised version with beautiful sunshine, golden sand and ice cream or fish and chips.  Fortunately for us, despite the satnavs best efforts, our recent visit to Scarborough Bus Fest in Yorkshire was much closer to the picture postcard ideal.

Scarborough is, of course, famous in bus term as the home of Plaxton which was founded in the town 110 years ago.  This was celebrated at the event with Plaxton vehicles attending.  It can be really easy to get a bit down when thinking about the automotive industry in Britain, so many of the household names have disappeared, so it’s wonderful to see one continuing and being celebrated.

The venue itself was a short walk from the sand and sea of the north bay, with a shuttle bus service running regularly into the town centre and along the seafront.  We started off at the rally site and it was fun to not only look at the buses parked up but to have a mooch on the stalls as well.  I also shot some footage at the site before we headed into town on a preserved B10 that used to form part of the Reliance fleet.  There is a video of that journey below, in fact, I’ve linked to all the videos specific to the Bus Fest at the bottom of this post.  The circular shuttle service which ran up into the main town then looped back along the seafront was a free service and we were surprised that the buses weren’t carrying donations buckets.

The atmosphere on the buses was friendly and after a stop off by the mainline Railway Station, we headed back on a ‘Coastliner’ Wright Gemini.  That part of the trip included a few stops for photos and she did look very beautiful in her shining blue livery in the sun.  We then finished the day off watching the open topper sightseeing buses (plus a few from the rally) going along the sea front while eating ice cream in the sun.  All in all a wonderful way to spend a Sunday. 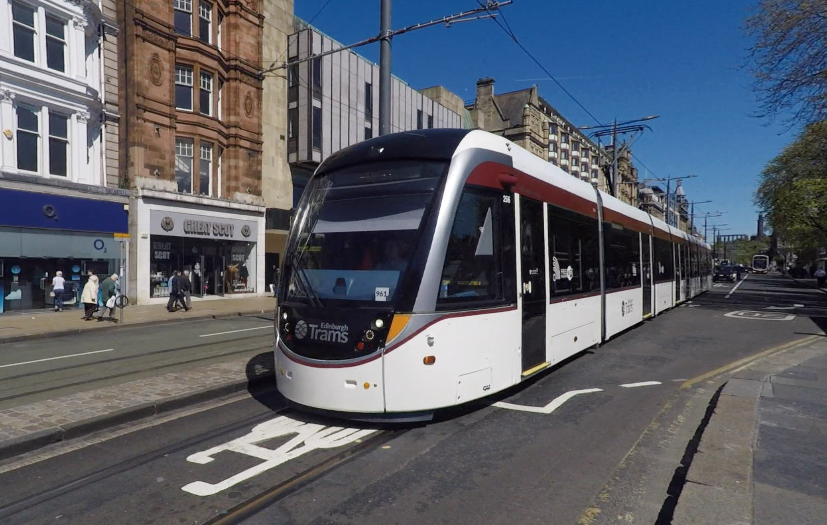 Edinburgh Trams, two words able to create eye rolls in locals, despair in politicians, but smiles on tourists and enthusiasts.  A quick google search will bring up lots of information on the saga of the project, massive cost overruns, huge delays, bitter arguments and political intrigue.  The sort of stuff that gets more than just a footnote in a history book, and that’s not even taking into account the feelings of the locals who endured years of disruption to their lives.

So cards on the table, I love trams, probably a predisposition that goes back to childhood rides along the seafront in Blackpool on family holidays.  I really don’t know exactly what it is, but they bring a smile to my face so I knew I wanted to film the Edinburgh trams when we visited recently.  All that said I know that whenever I visit Scotlands beautiful capital city, I look forward to those big long white vehicles, snaking their way through the traffic and people.  The ‘ding’ of their bells turns my head, not to see if I need to get out of the way but to watch one go past.

Edinburgh isn’t the only city to go back on its decision to rip up the tram rails and start laying new ones.  Nottingham, Sheffield, Manchester and others have reinstated the tram.  So will we be seeing more cities bringing them back?  Given the trauma suffered by Edinburgh I suspect most will think long and hard about it, but personally, I’d love to see it.  Of course, I just get to enjoy the end result and wouldn’t have to live through the trauma of bringing the project to fruition. 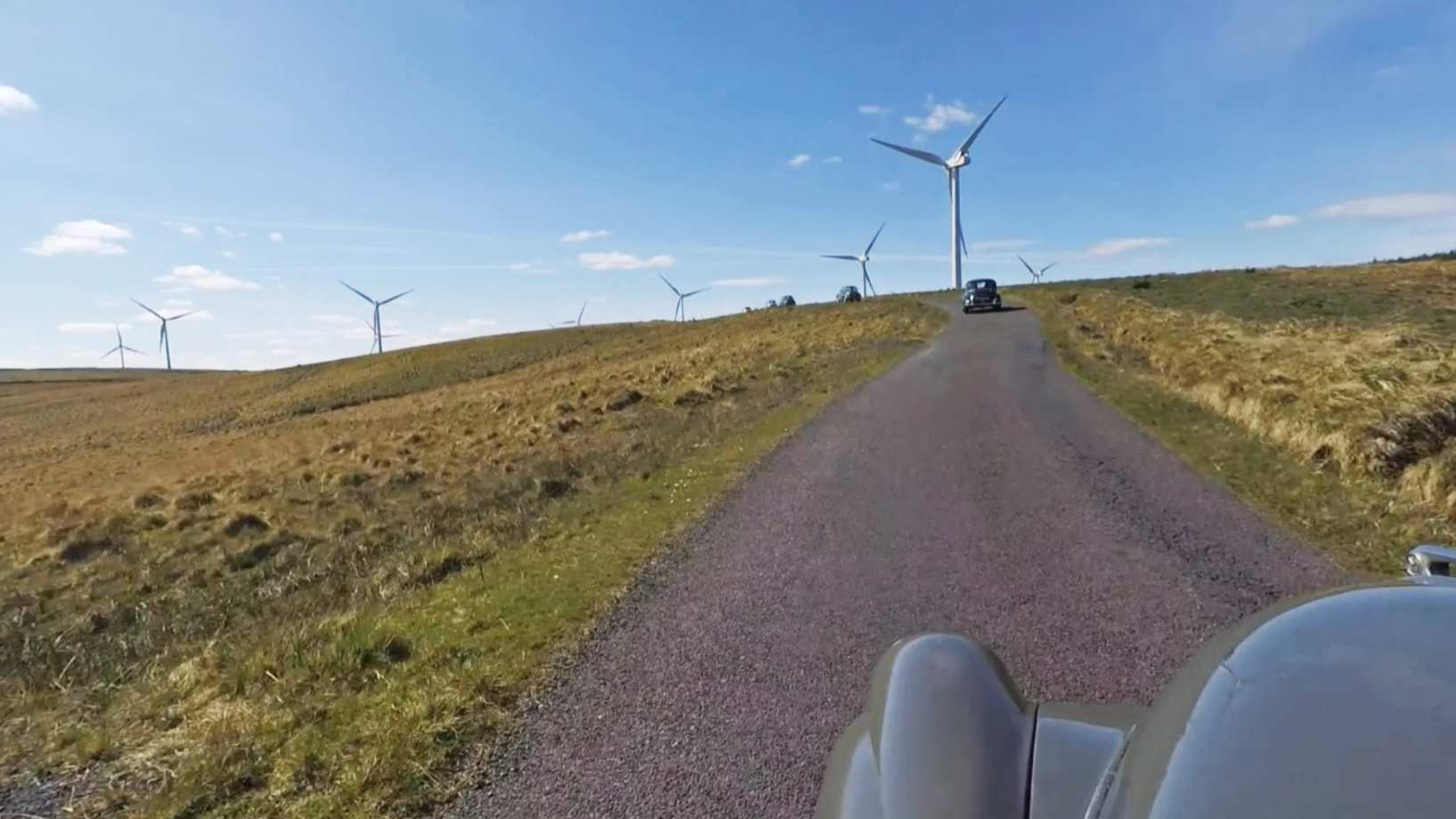 There is something special about just ‘going for a drive’ on a beautiful sunny day.  This year we had glorious sunshine for the National Drive It Day and we were excited to head out to meet other members of the North East Morris Minor Owners Club to go for an explore.

‘Horace’ our 1961 Morris 1000 had been duly polished and pampered by Ian who would be driving, as usual, I was in the passenger’s seat with a camera in my hand.  I don’t tend to go far without a camera and there was no way I was leaving it at home with all the beautiful blue skies promising a wonderful day.

This year we were venturing up into Northumberland, although apart from the start and end point I didn’t really know where we were going.  The thing is I didn’t really care.  These cars are not about your destination but about the journey itself. 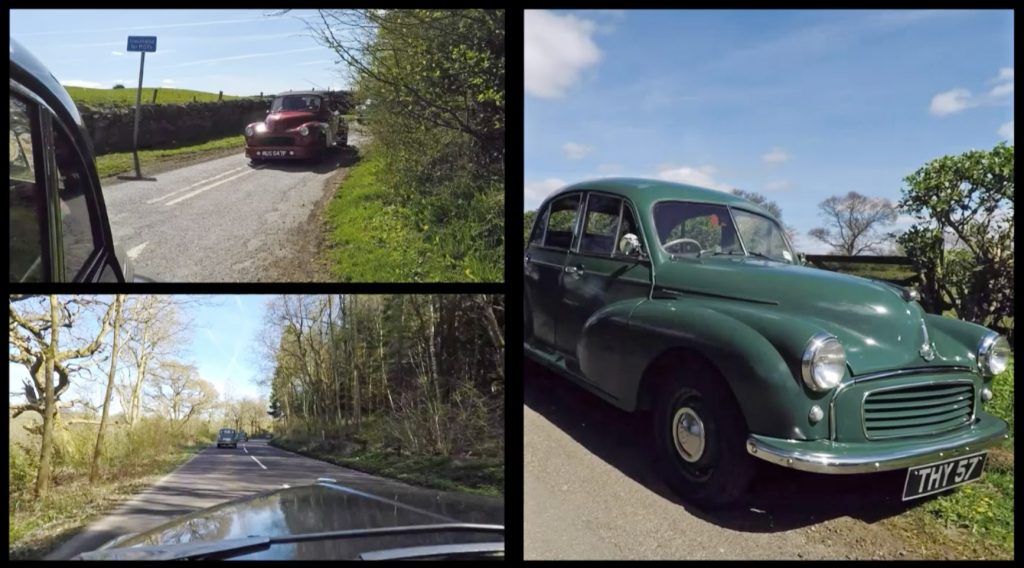 Drive It Day with the Morris Minor Owners Club 2017

Most of the drive was essentially how we had hoped it would be.  In the middle of a convoy of Minors travelling down the country lanes, just enjoying the slower pace of life (occasionally punctuated by grumbles about modern cars getting in my shots).  Then we started going up a hill and I could see Wind Turbines up ahead.  A few turned into many and they continued to grow in size as we headed over some cattle grates. 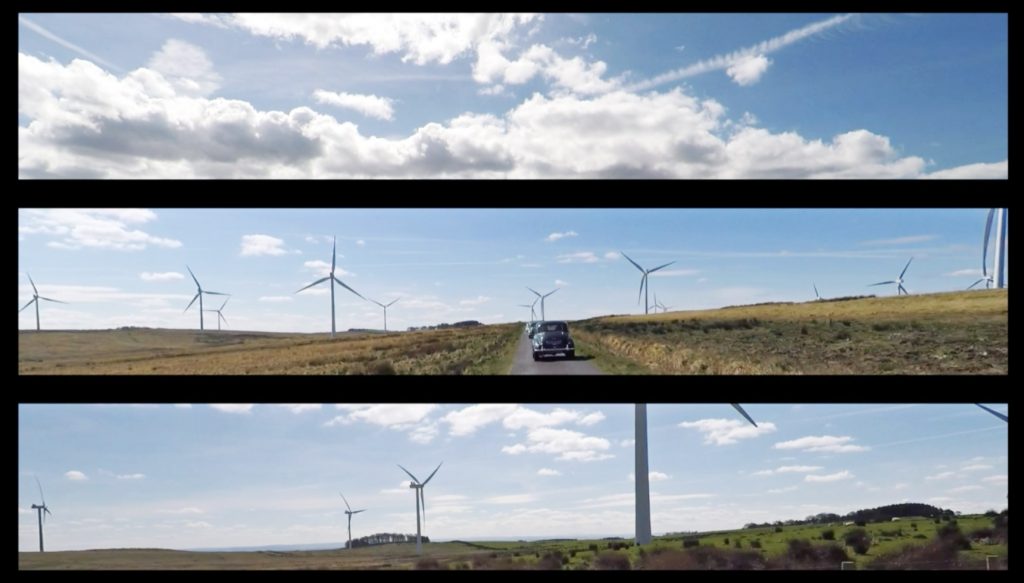 Drive It Day with the Morris Minor Owners Club 2017

Suddenly we were surrounded by them, towering above us and elegantly swishing round, the sun shining down and glinting off the cars in front.  It was a beautiful sight, one that will stay with me for a long time. 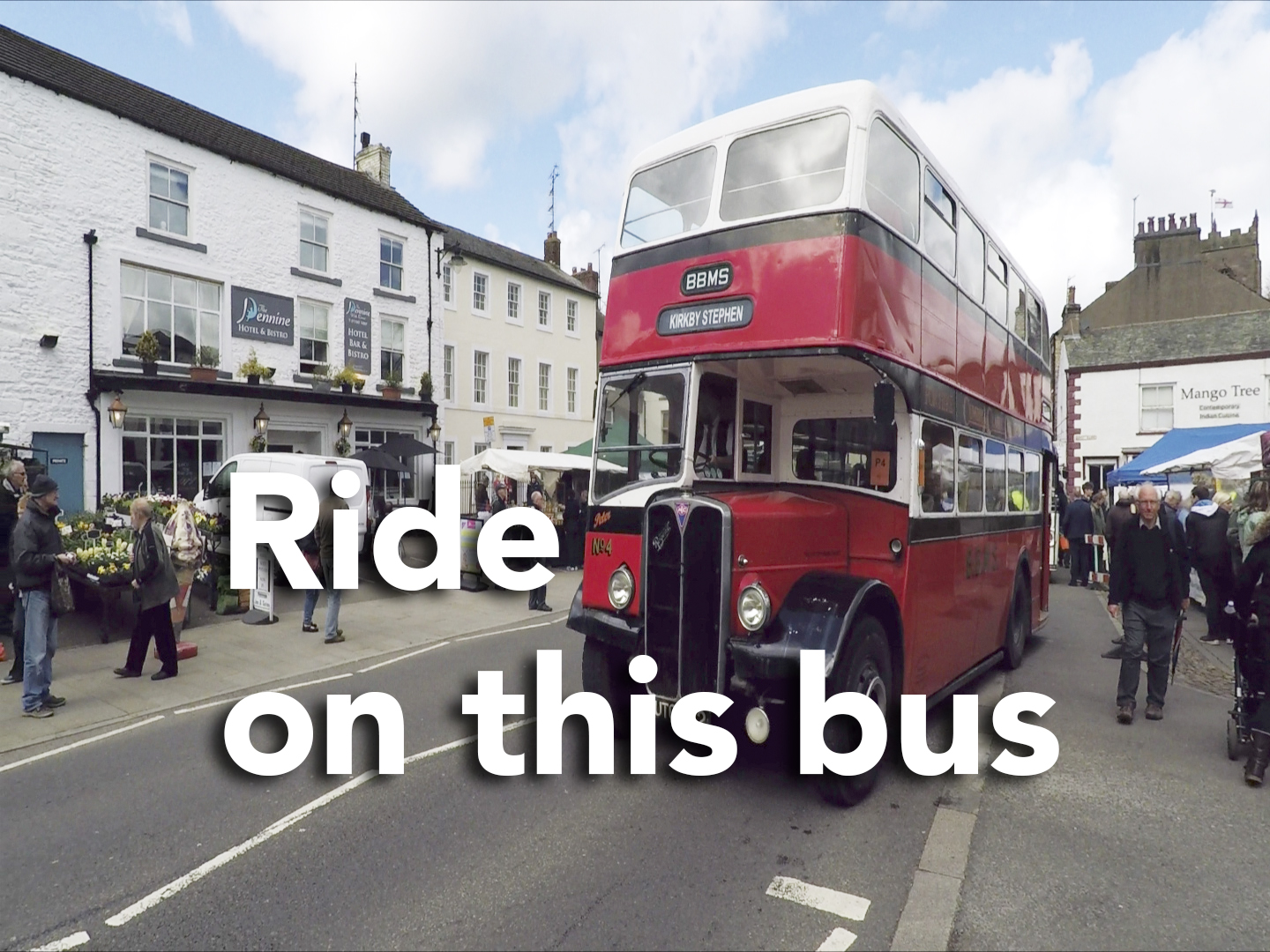 Some people love ‘Ride On’  or ‘Bus Ride’ videos and make lots of them.  We’ve always concentrated on shots of the outside of vehicles until now that is.  Easter weekend saw the Kirkby Stephen – Brough Commercial Vehicle Rally with lots of classic buses operating an event service between the two sites.  Time for some ride on footage!

Like most people, we tend to park at one site and then use the buses to get about.  The ones running the service vary, even including some coaches, and you can ride them for a donation.  To be honest I don’t think anyone would kick up a real fuss if you didn’t donate but given how much these old beauties cost to maintain and run why wouldn’t you?

From a filming point of view, this type of video is fraught with problems.  First, you need to get an appropriate seat on the bus.  Not as easy as it sounds unless you want to film lots of heads for the duration of the journey, personally I’d prefer the scenery and something of the bus if possible.  Seeing some of the other classics on the road is an added bonus.

Then there is the aspect of keeping your camera reasonably stable.  Setting up a tripod isn’t really an option so you need to hold the camera by hand, which is a bit scary since these old girls tend to shudder and judder a bit.

The last big issue I found was condensation.  All those people, many of whom are wet from the rain, cause condensation inside the windows, obscuring the view.  Again not great for getting good footage.

All that said, it was great fun.  On one trip the gentleman I sat next to was mesmerised by the tiny image on the back of the camera, just like me  We could have easily looked up to see what was going on but that footage on the back of the camera held our attention more strongly.  In fact, when we got to the end of the ride the driver even said he was mesmerised by the camera which he could see through his mirrors!

I find it fascinating how in our modern society we can be so transfixed by a camera or screen when the real thing is right in front of us.  I’m not going to complain though as I got off the bus each time with a big grin on my face.  In total, I shot 4 ‘ride on’ videos over the two days of the rally, all of which will be making their way onto the YouTube Channel along with the other videos of the weekend.  As for me, I’m just looking forward to my next ride on a classic. 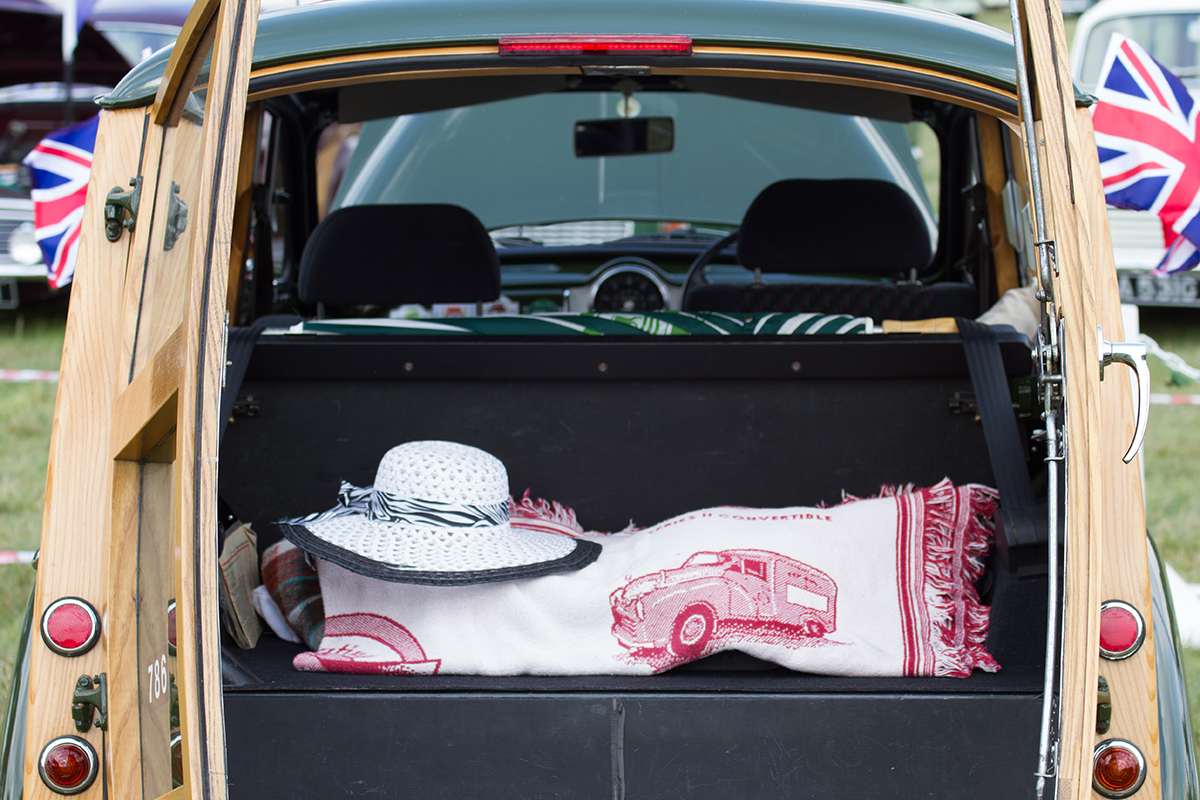 Welcome to the site.  It’s a brand new site to match the brand new name.  Which naturally leads to the question, why the name change from Ians Bus Photos to The Transport Lens?  Well it’s all wrapped up with how it all came about and how it’s changed in the last year or so.

Ian has been taking transport photos, primarily of buses, since childhood, selling prints at rallies and online via eBay.  So when we looked at developing the first website the name seemed quite obvious, ‘Ians Bus Photos’.  I tended to shoot classic cars more at rallies, and last summer added video.  After a little while we started the YouTube Channel and it just kind of grew with the same name.  There are, however, a few obvious issues, it’s not just Ian, it’s not just photos and it’s not just buses!

So we started thinking about changing the name and eventually decided upon ‘The Transport Lens’.  This will allow us to reflect the broader range of what we do and also encompasses the video work.

The video work is now all being moved over onto the main channel so you might spot a few older videos that had been hosted elsewhere appearing.  In the future our video work will all appear on the main ‘The Transport Lens’ YouTube Channel with the occasional link within a post here on the blog section of the website.  Ian is also continuing to sell his images via eBay but at present we won’t be adding any of the archive to this site for automated online ordering.  This is purely a practical decision while we work on scanning the analogue images and improving the cataloguing system.  (Of course if you have anything specific you’re looking for then get in touch and if we can help we will).

So we hope you like the new name, new look website and don’t forget to say ‘Hi’ if you see us out and about with our cameras.