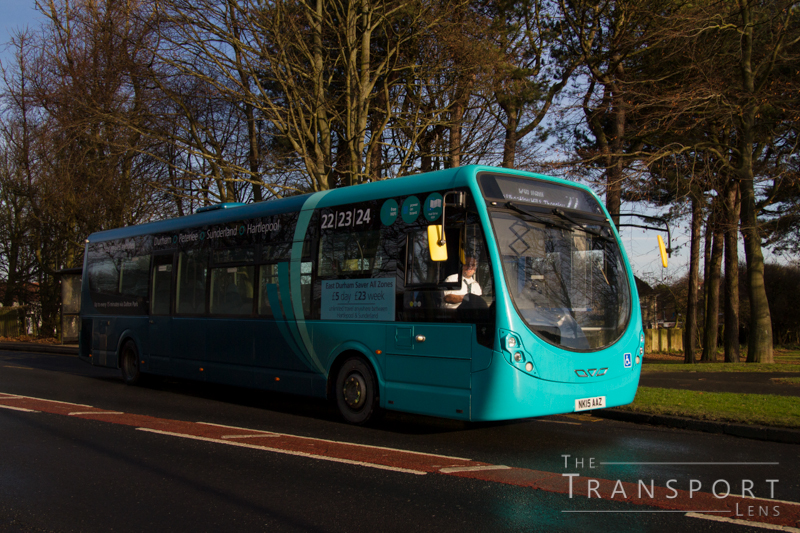 Sometimes the light is just so nice I can’t resist the urge to take my camera out for a few shots. During winter, especially that awkward week between Christmas and New Year, it can be hard to get out with lots of demands on your time. So while the light was nice, I grabbed my camera and headed out the door before anything could pull me in another direction.

Despite it being late morning the sun was low in the sky, creating strong directional shadows. This can be a blessing and a curse depending upon how you’re able to position yourself. I decided to go to Essington Way in Peterlee where I knew the light would be streaking up the road just slightly to one side. There is also a bus stop I have a strange fascination with, don’t ask me why because I have no idea, but I’ve photographed it a lot more than is probably normal for an average bog standard bus stop.

The speed limit on this stretch of road is 30 miles per hour and I thought it would be wise to expect that the buses would be doing close to that, let’s not assume the drivers were speeding, so unless they actually stopped at the bus stop I was going to need a high shutter speed to freeze the action. When out on a shoot I always decide upon a starting point for my set up and then adjust as appropriate.

One of the disadvantages with shooting at a location like this is that you don’t have the volume of buses that you would expect at say a bus station, which I guess is why most bus spotters/photographers tend to stick fairly close to the bus stations. You do get plenty of cars and other vehicles going past and while they weren’t what I was interested in they can act as great substitutes to test settings and composition. I positioned myself south of the bus stop on the opposite side of the road, dialled in the changes based upon shooting a few cars and waited for some buses.

It’s Go North East and Arriva in Peterlee, no Stagecoach and I ignored any buses heading along the road northbound. With the sun directly behind them, it wasn’t going to give the sort of shot I was looking for so I resisted the urge to keep checking in that direction, concentrating instead on the southbound traffic and the bus stop.

All too soon, after about half an hour, I needed to head back but it was great to get out in the fresh air and light. It was a couple of days before I could get the photographs up on the computer but here they are. Maybe next time I’ll try a little bit further down the road and go for one of the beautiful open green spaces of the town as the background.