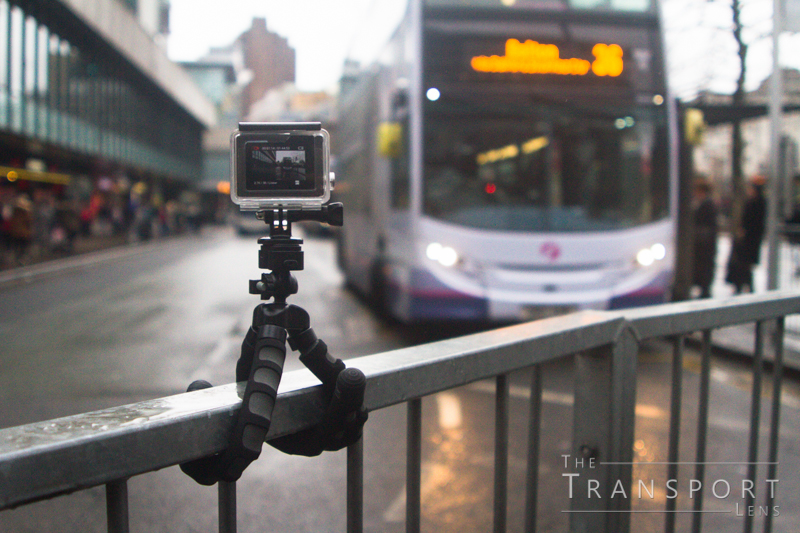 We normally try to visit Manchester for a bit of spotting at least once a year, but this time instead of going on our own it was a trip with the Northern Group Enthusiasts Club to the Manchester Museum of Transport December Open Day.

Ian has been a member of the club for years and he’s now added me as a joint member with him. So does that mean I’m now officially a card-carrying bus spotter? I suspect I crossed that boundary a while ago but hey ho this is my first club membership.

We arrived at the Museum just before lunchtime and decided to take the shuttle bus into the centre of Manchester straight away. The idea was to film and photograph in the centre before it got too dark. At the moment it’s getting a little too dark for good footage around 3 pm (ish). The weather was also against us as it was dull, overcast and drizzly so there was a good chance twilight would arrive even sooner.

The drop off point was at Shudehill Interchange and we gave it a go there with the cameras briefly. Unfortunately, due to the road layout, amount of traffic and all the people it wasn’t a very good spot for video so Ian suggested we head up towards Picadilly. It’s not a long walk although it did take us past a large Jessops store which I naturally had to take a quick peek inside. I truly miss the days of high street camera shops.

Once at Picadilly I settled into my ‘usual’ spot at the end where the buses swing a 180 turn, which also happens to be near some of the tram tracks. If you’ve watched the vlogs then you may have come across how much I like trams. I’ve no idea why I just love them. So being in between buses and trams is a happy place for me. Ian, of course, wandered off to get photographs.

Normally the way we work is that Ian takes photographs and I take video. However this time I also had a stills camera with me, a new to me lens which I bought on a market stall and I wanted to give it a good testing. I much prefer to test in ‘real’ situations rather than say pointing it at the dog on the sofa. All the still images in this post were taken using this lens (a 28-105mm Canon from the film era in case anyone is interested) and although it struggled a bit to track subjects overall I think it performed well.

I also took the opportunity to shoot some more time-lapse footage. I can’t tell you how much I’m enjoying doing these time-lapse videos. Not everywhere is suitable for them and at one point I had my tiny little tripod on the ground with me standing practically over the top of it to prevent any of the people passing by from knocking it over. I’ve got to admit Manchester Picadilly seems to be one of the worst places for people randomly walking about. Every time we visit I’m amazed there aren’t lots of accidents. People playing chicken with buses and trams or just plain old walking in front of them without looking. It must drive the drivers bonkers, or at least it would drive me bonkers.

Soon enough the light was fading to the point where we decided to head back to the museum on the shuttle service. Once there we headed inside for a look round. What a cracking place! Honestly, I could have spent a lot longer in there looking around and chatting to people. It’s definitely one of the best transport museums I’ve been to and the cafe makes a mean cup of hot chocolate as well.

Soon enough though we were back on the coach and heading for home. I’m pleasantly surprised with how well the camera coped with the overcast drizzly conditions and low light levels. As always you can check out the video on our YouTube Channel.