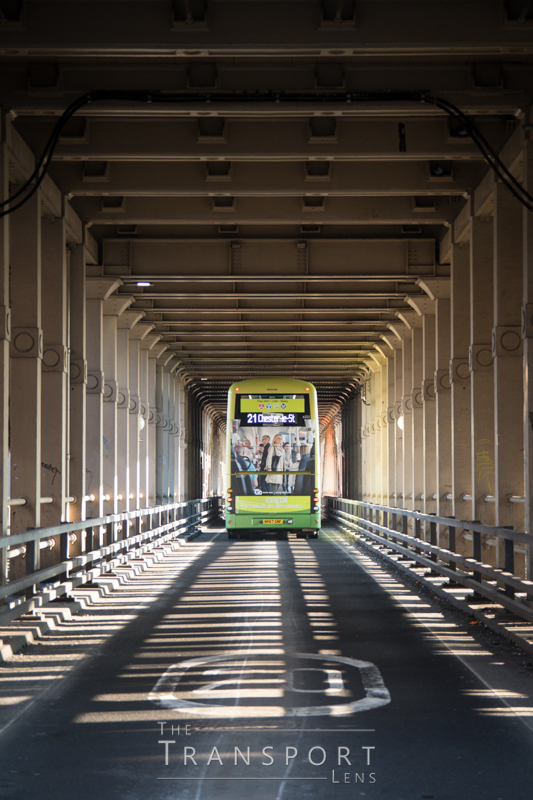 We’re all familiar with the ‘standard’ bus photo, and there is nothing wrong with them, but is that all there is to bus photography? Well no, obviously not, but a quick scan of Instagram or Facebook might lead you to think it is.

Now we all know why that composition is so popular. If your reason for taking the shot is to record information about a bus or vehicle then it’s the best angle to get the maximum information, the front and side and maybe a little bit of the surroundings. The purpose of those photos is to show the vehicle, it’s features and livery but that’s pretty much it. But you can (and some people do) take photographs where the emphasis is more on the context and surroundings of the bus, placing it more in its environment. In some ways, I find this even more interesting.

I found myself taking some of this form of composition recently on a visit to Newcastle. I was on a little bit of a wander before a meeting and found myself down near the High Level Bridge which spans the Tyne between Newcastle and Gateshead. Opened in 1849 this double-decker bridge carries road traffic (pretty much just buses on the road part) on the lower deck and rail on top.

The road section is split into 3 with a pedestrian path, a single lane for vehicles and a cycle path (made out of a second pedestrian walkway still used by pedestrians as well). What attracted me however was the wonderfully graphic nature of the structural members, I’m a sucker for a nice bit of engineering especially if it forms beautiful graphic patterns.

Now I’ve been known to do things that others consider crazy to get a photograph but playing chicken with traffic isn’t normally one of them. So I started off by shooting some of the people walking through the tunnel-like forms created by the bridge as they walked across. But buses kept going past… and they looked so wonderful… and the light was just perfect… and the graphic setting… I just couldn’t resist.

Fortunately, I was there at a time when there wasn’t much traffic meaning if I paid attention I could time running out and shooting some quick shots before getting back out of the road thanks to some well-placed traffic lights. All that said I only shot a few photos and decided that I’d tempted fate enough.

Because I was shooting from the Newcastle side where the buses are heading onto the bridge it meant I could only get shots of the backs of the buses. Waiting till they were far enough onto the bridge to show off the bridge structure around them. They are far from the ‘standard’ three quarters bus shot, but I do like them. Perhaps next time I’ll be able to try from the Gateshead side with the buses heading towards me. That said I’d only want to try it with someone with me to keep an eye on the traffic.

As I looked at the photos on the computer for editing I couldn’t help but think about a saying I used to hear a lot. If you wanted to say someone had an unattractive face you’d say they had ‘a face like the backend of a bus’, which apart from being unflattering to the person in question was also not very nice about buses. I’ve not heard this saying recently so perhaps it’s fallen out of use due to being a bit mean, or perhaps the backends of buses have become prettier in some way. Either way, I rather like my photos of the backend of some buses on the High Level Bridge.