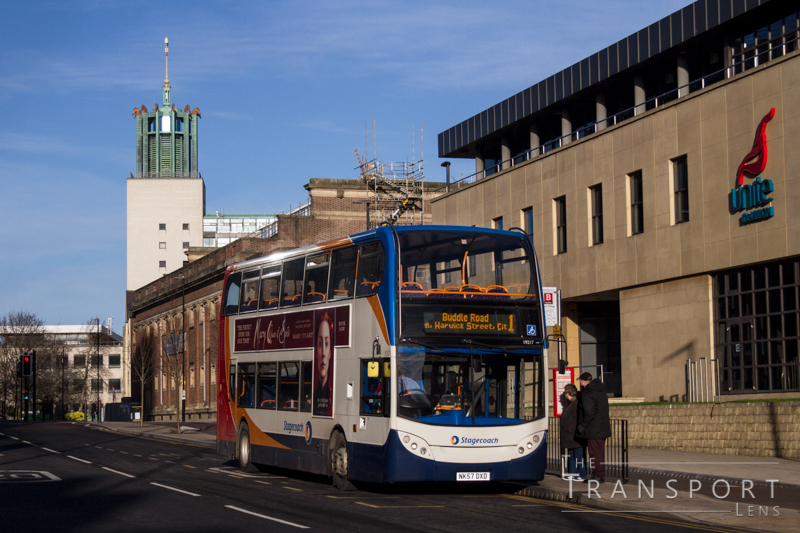 Bus spotting in winter can be cold and miserable, so why do we do it? Last weekend I found myself stood on a corner in the cold with a biting wind blasting me constantly cutting straight through all my ‘warm’ clothing with no effort. The weekend before I was freezing on a different corner, so cold I was struggling to feel my fingers and when it was time to leave I discovered my feet were numb making walking difficult. So why do we do it?

Is it the thrill of the chase? Trying to get a shot of that elusive missing bus which would complete a set in our collection, allowing us to tick off a missing fleet number? Some bizarre hybrid game of hunter vs prey with bingo thrown in for good measure. Of course, that leads to all sorts of weird mental images flowing through my head. You know the sort, the mighty hunter stalking their prey on the Serengeti hoping that the gazelles (which in my mind have now morphed into dinky double-decker buses) drinking at the water hole as the lion slinks through the sparse undergrowth. Then as they spot the danger and dart off, the lion pulls out a bingo card and chubby marker and starts marking them off as fast as possible. Then later that evening as they proudly show their buses bingo card to the family they’re met with eye rolls and exasperated sighs.

Ok so I’ve got a vivid imagination at times but I guess there is probably an element of collecting for all of us, some more than others.

Of course what we’re looking at is important as well to varying extents. I’ve met people who are interested in the minutest details of each coach and its history. Others with only a passing interest (but they really need a photo of it for their collection). Some people are only interested in buses, some only trains, some both and other combine the interest with other vehicles as well.

Yet at some point, we all seem to end up stood outside in the cold with a camera or notebook. Why? I’d say we’re strange, except normal is boring so to pinch a quote ‘Viva la Difference’ and I’ll see you all on a frozen corner with my camera soon.