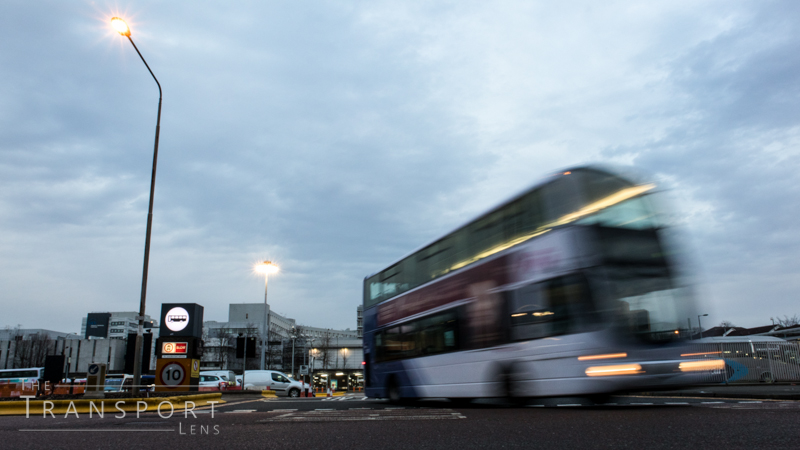 Recently I was in Glasgow for work for a couple of days. So naturally, I hoped to be able to photograph a few buses whilst there, especially since there are some new ones since our last visit. No video though as there was no way I could take the big tripod and sound gear.

This was how I ended up standing at Buchanan Bus Station before breakfast, camera in hand and grumbling tummy. Unfortunately given the time of year, February, and the weather, really overcast, there was little decent light to speak of. So I was left with 3 choices. Leave and hope I could return later once the light improved. Ramp the ISO right up on the camera, or get creative. Option one was out as I really didn’t think the schedule would allow me to return. Two, ramping the ISO would definitely produce images but I’d be running a risk about the noise levels on the images and I’ve not yet tested high ISO levels on this new camera. Getting creative, option3, may or may not produce any images but would definitely be the most fun.

You guessed it, option 3 it was.

I did have my tiny bendy tripod with me so I was able to make use of the railings on the opposite side of the road by the entrance/exit, setting the camera up for some long exposures.

Long exposure photography is one of my favourite areas and I absolutely love the effects that can be created. I’m not talking about with photoshop but in the camera at the point of taking the image. Unfortunately, Buchanan Bus Station isn’t the most photographic location if you’re going to shift the emphasis from the buses to everything else, but hey, since when has every shot needed to be worthy of National Geographic! Are they going to win any prizes? Not a chance. Doesn’t mean I didn’t have fun though.

Fortunately, as I wandered back to the hotel the light did improve and I found a few of the new buses down on Argyll Street and in George Square allowing me to take some more ‘normal’ shots. These more traditional shots kept Ian happy. It’s going to take me quite a while to get through all the shots and when I do I’ll look at putting a few up on our social media account like Instagram and Facebook. In the meantime here are a few of them. Oh and don’t be too judgemental about the long exposure ones, remember I just had some fun with the technique, although I suspect I’ll probably do some more in the futures are a location which lends itself more to this type of photography.

Take care till next week
Mara